Hey guys! Renet here and this week, we will talk about the dodge mechanic in League of Legends. Here are the topics that we’ll cover:

What is Dodge? Why players dodge?

Dodging is when you exit the client during Champ Select. Most players dodge the games to avoid playing the game. There are multiple reasons when people dodge. You will find further on this blog when to dodge for your own sake and keep in mind that other players normally dodge for the same reasons as we’ll mention!

You can dodge by clicking on the x button on the right corner or you can wait until the timer for choosing your champion runs down without picking/locking anything.

Why you should learn how to dodge a game

You might ask, “why would I dodge a game? I’ll have to wait 6 minutes and even lose LP for it!” It's true when you dodge a game you lost 3 LP but you won't lose MMR which is really important if you like getting 20+LP per win!

Your chance to win the game is about 10 %. If you don't dodge the game you will have a really low chance to win that game. And even if you don’t dodge, you lose for example 17LP that game along with MMR while if you dodged in the first place, you would have lost only 3LP and no MMR! You have to wait a couple of minutes but at least you’ll have a better chance to win on the next game rather and your MMR remain intact.

The next example of why dodge a game is when you get a troll player in your team who wants to play, for example, Yuumi jungle or a toxic player! If you can avoid playing with such players, why wouldn’t you? Basically, you want to use the dodge mechanic when your chances of winning are lower than 50%.

When to dodge a game

The best way to know when you should dodge is simple, the common reasons for dodging are as follows:

- If a player is not playing their main role, have a low win ratio on their selected champion, or are even first timing a champion,

- You are an OTP player and your champion gets taken,

- Your Teammate is trolling or being toxic,

Pros and Cons of dodging

- Not playing a game with a low chance of winning,

- Not wasting time nor mental cells when someone decides to play Yuumi jungle,

- Easier to climb in a long period of time, 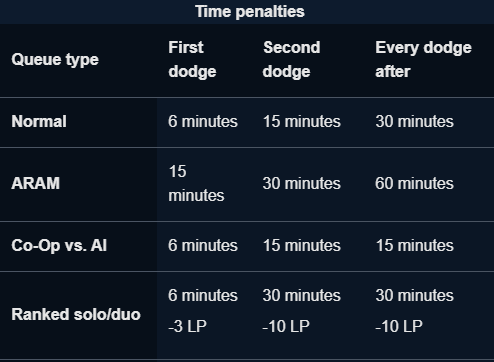 The pros of dodging are way better than the cons and that’s what you should take into consideration as in the long term you’ll feel way more frustrated and with poor MMR.

Are dodging games really worth it?

Do you like to test your mental health and you don't mind challenging yourself in games with a Singed jungle or don't mind losing LP and MMR? Then dodging is not for you, but if you don’t like any of the mentioned above and want to have an easier time climbing over a long period of time then you should dodge!

From personal experience, after I start dodging games I didn't tilt as much as I did before. It helped me focus on my games better because I was not tilted from my previous games with toxic/troll players, and after 2 months I had such an easier time climbing because I was getting +21 -14 and only because I master the dodge mechanic!

Riot has decided to remove the duo option when you reach Master tier. A lot of players were not happy about that change, mainly bot lane players and after some time when the season started, someone came up with the idea that they will dodge the games in Diamond 1 promotion so they’ll be able to continuously play as duo.

Because of how dodging works -you are losing LP but you won't lose MMR- it means that you can keep playing with master-challenger players even when you’re in Diamond 1. As bot lane players (adc+support), you have a huge advantage because you can use voice communication and the enemy bot lane can’t.

This ended up destroying a lot of games because the players who decided to abuse the dodging system could play duo on master-challenger elo games which gave them an unfair advantage.

And this is all from me about dodge mechanic. Let us know if you enjoyed it and if you would like to see more content like this. You can always reach us on our social media to give us feedback!