Teamfight Tactics just got its new "season" with the Set 2 released. A bunch of new champions, traits, and origins were added into the game, on this blog post we'll be talking about the most important changes done from set 1 to set 2 and how can you abuse the meta on this new season of TFT! So let's start right now.

Biggest changes in the game

The terrain will change every game (you can see right away which element the game will have by looking in the middle of the carousel right when it starts). This gives the respective bonus to a random tile at the start of the game and a second one right after the PVE golem round. It will behave like an actual item given at the start of the round, which means you can't place champions with 3 items there.

There are 4 types of tiles that the terrain can start with:

- Mountain (gives +30 Permanent HP at the start of each round).
This system will affect the gameplay and how to position units on the map, some comps are better than others depending on the terrain. We'll be talking about it later in this blog post!

The days where we build a protective comp for one carry (think of 6 brawlers + jinx) are over. On this set, there are no proper hyper carries, the only ones that exist are melee, and the value of defensive items such as trap claw has diminished.

The team should now have more sources of damage and this leads us to the next important change.

Since you don't need to look for that 2-stars hyper carry that used to be the heart of the comp. The consequences are that you can’t rely on hitting an upgraded unit to make your comp work, but you should be solid whether you get it or not.

The needs of a Giant Slayer or a Dragon Claw is not a thing anymore, after the nerfs on these two items (and as we stated before the removal of hyper carries), there is a better balance and you can be less “greedy”, by not waiting for the right item to fuse them with.

The new theme could be “anything works“, as long as it's well thought and not completely out of place, you can make use of any item you get.

- Vladimir: Reveals his true strength on 3-stars, being very annoying with his healings in a mage comp,

- Diana: Simply overpowered to be a tier 1 unit, shield and damage allows her to carry the early game,

- Maokai: Can be used until level ~8 as a frontline thanks to the woodland buff,

- Zyra: Is a very strong early game unit. She doesn't scale well tho, since her damage will split among all the enemy units.

- Rek'sai: High true damage on her ult. Can be used together with the predator trait to perform interesting one-shots. When being 3-stars, she hurts enough to be kept in the late-game too,

- Malzahar: Does fine damage early game, and his traits are both very good,

- Volibear: Solid option, since he will never waste his ult on low HP targets;

- Mundo: Big frontline, even high damage if he reaches 3-stars,

- Sivir: Able to apply her on-hit items on anyone, she has the potential to literally prevent the enemy team from doing anything,

- Kindred: Has a very low amount of mana for a good damage ability, tho she can deal a lot. Also, she is also good when going for utility with healing reduction,

- Nocturne: With good items (Infinity Edge and Crit Chance items) he can kill anyone while healing himself,

- Qiyana: Her type changes accordingly to the terrain, you need to keep her in mind while building your comp. She's also a fine unit with a quite good amount of damage on her spell.

- Olaf: One of the few hyper carries the set 2 offers, with a berserk comp and glacial buff, he's able to kill the enemy team, healing himself preventing any kind of CC on him,

- Kha'zix: His ability allows him to quickly kill targets, but most of his power comes from the low amount of mana required (and the one refunded),

- Yorick: He is the core of any light team since his ghouls are able to proc and receive the light buff as well. He doesn't require any specific item.

- Master Yi: Another hyper carry available, (obviously) needs to be 2-stars, defensive items are usually better than offensive ones since he gets a lot of extra damage from his ability and trait (shadow),

- Singed: One of the best units, quickly spreading the poison trait on anyone, reducing healings with a morello. He is also able to mess with enemies positions and focus since he keeps walking and cant be Cc'd.

- Nami: Good supportive unit, her ability always hits most of the enemies, applying CC and buffing your team.

- Zed: The weirdest champion among them all, yet has the potential to be the strongest. He's not good by himself but his ability creates a clone with the same items, making him extremely items-reliant (Guardian Angel, Redemption, Zapper)

- Guardian Angel: Since there isn't any champion able to apply damage and CC during the revive time, like Kennen/Morgana/Swain before, this item is less valuable,

- Trap Claw and Rapid Fire Cannon: The lack of a ranged hyper carry makes both of these items less important than before,

- Dragon's Claw and Giant Slayer: Both of them got nerfed with the set 2, but are still decent items,

- Spatula items: They are weaker since they don't provide doubled stats anymore. The best ones are the Mage Hat, Inferno Cinder, and Talisman.

- Morello: Great item to reduce healings, can be kept on Neeko or Syndra in the early game,

- Seraph or Shojin: Both of them are really good with the increased number of AD/AP casters. Seraph can make Kha'Zix ults without any delay and nearly the same happens on kindred,

Similar to set 1, you try to snowball right away by winning as much as possible, getting extra gold from wins and winning streaks. Try to do as many 2-stars champions as possible and place any upgraded unit on the buffed tile. Remember to level up before the first PVP round and after the carousel.

Priority traits: Woodlands and Predators, but keep in mind that level and 2-stars champions are more important than traits. 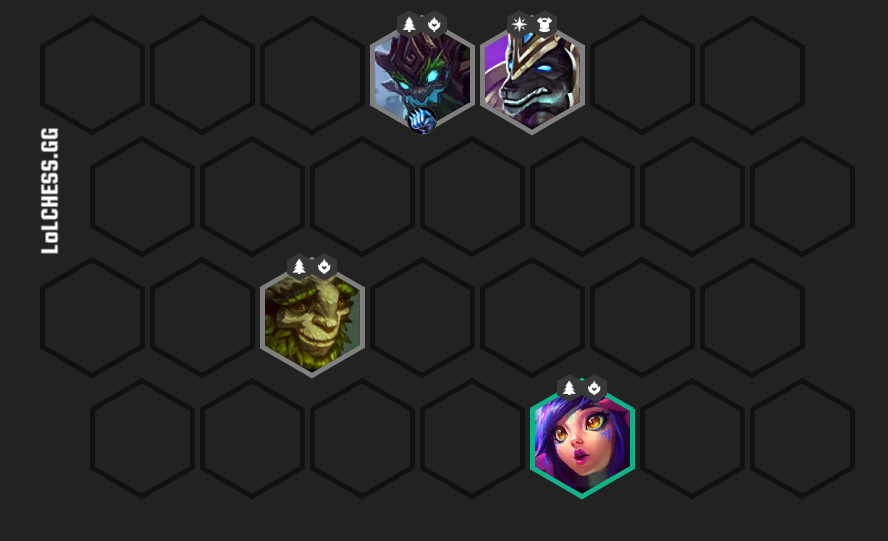 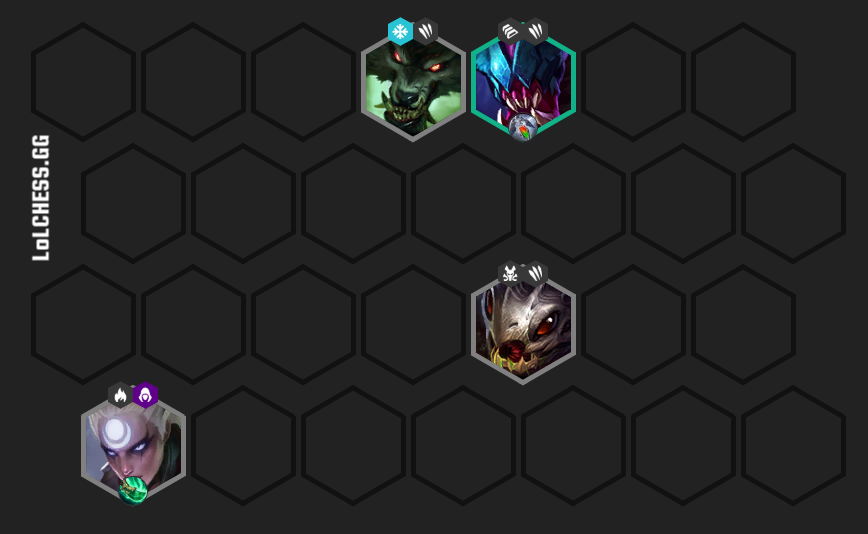 - 3 Mages are doable but not recommended. 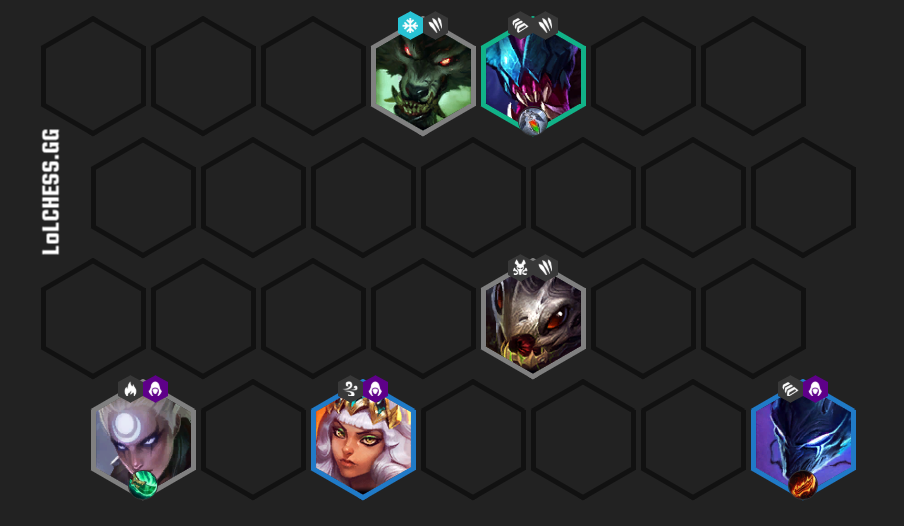 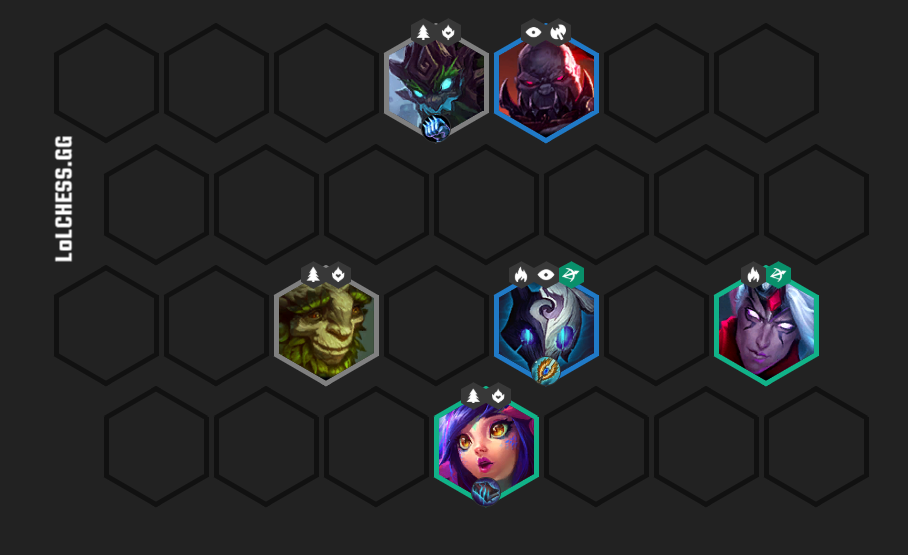 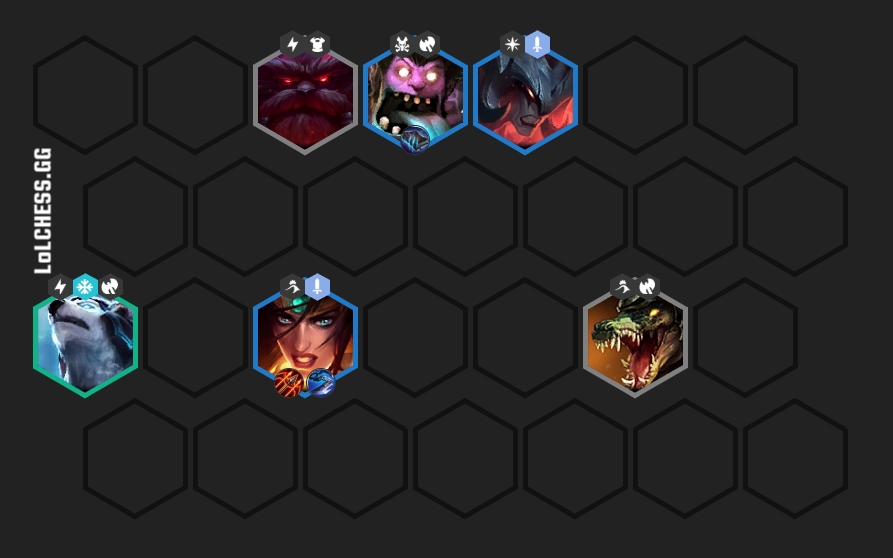 Once you feel like you can win most of the rounds you can save a bit, getting LVL7 after wolves and spending again your money. Hit a good comp since now synergies are more important, and you should be close to the ideal late-game full comp. After reaching a decent team, the best would be getting to raptors with 50 golds so you can LVL up and try to complete your comp.

But also some comps like 6 Mages with mage hat or 6 Infernals with Cinder can eventually work well. 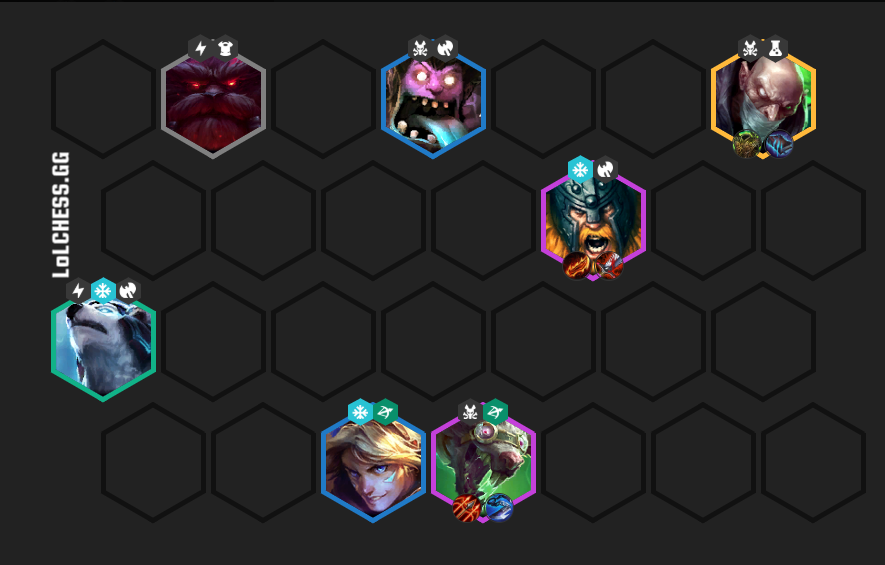 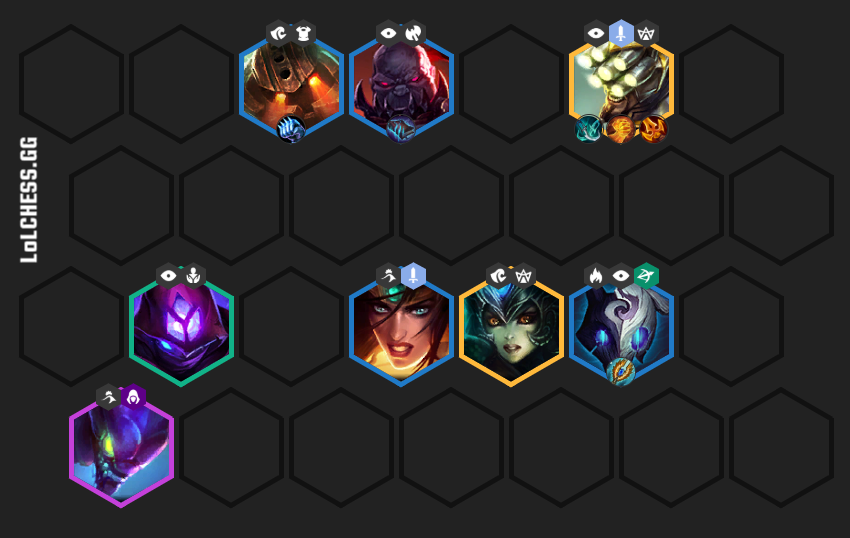 To win the game you probably need 3-stars champions that tier 2-3, the best ones among them are probably Mundo, Kindred, and Azir.

This playstyle is riskier but has a higher chance to bring you the 1st place. Differently from set 1, tier 1 units are pretty strong when they reach 3-stars, but it means losing some HP in the early game. Never buy exp before reaching LVL5 and save as much as you can to hype roll after golems. Afterward, you want to start saving money to get levels later on.

The best Hyper Rolling comps are Lights and Predators. 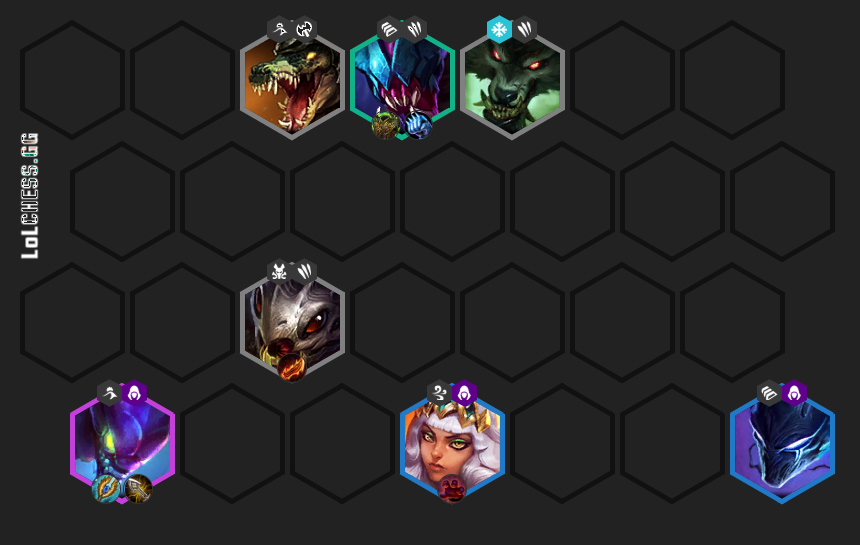 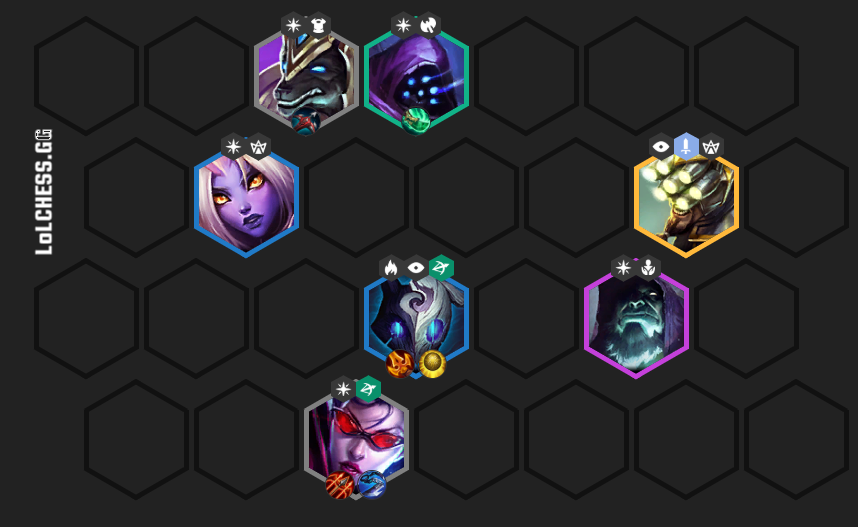 The conclusion is that set 2 has a lot of more viable comps and synergies, without anything being extremely stronger than another. All you have to do is to adapt and be creative... but not too much! I hope you enjoyed this guide and good luck in the arena!

This blog post was brought to you by one of our TFT boosters that have been doing amazing work! His name is Shelob and he will be very pleased to be your TFT booster or coach! You can assign your order to him, whether it is TFT boosting or TFT coaching, he will do it right away! Don't forget to follow us on our social media below and stay tuned for more content!