EB24 about Valorant #1 - Introduction of the game

Riot’s most recent game is almost out: VALORANT! We know that people are loving it while on the Closed Beta and we would like to introduce it to everyone who didn’t have the opportunity to play it yet! For those who have questions about the game, we’re here to help you!

Yes, VALORANT will be free to play, the only thing that will be required to pay is the cosmetics in the game, just like on League of Legends!

VALORANT is a competitive shooter game, similar to Counter-Strike but with some abilities! A fancier version of C.S if you think about it!

Yes, VALORANT will have a ranking system just like League of Legends. The ranks (at least updated for now) are the following ones. With the exception of VALORANT, each rank has three tiers. You need to play 5 Competitive Placement Matches to determine your rank. 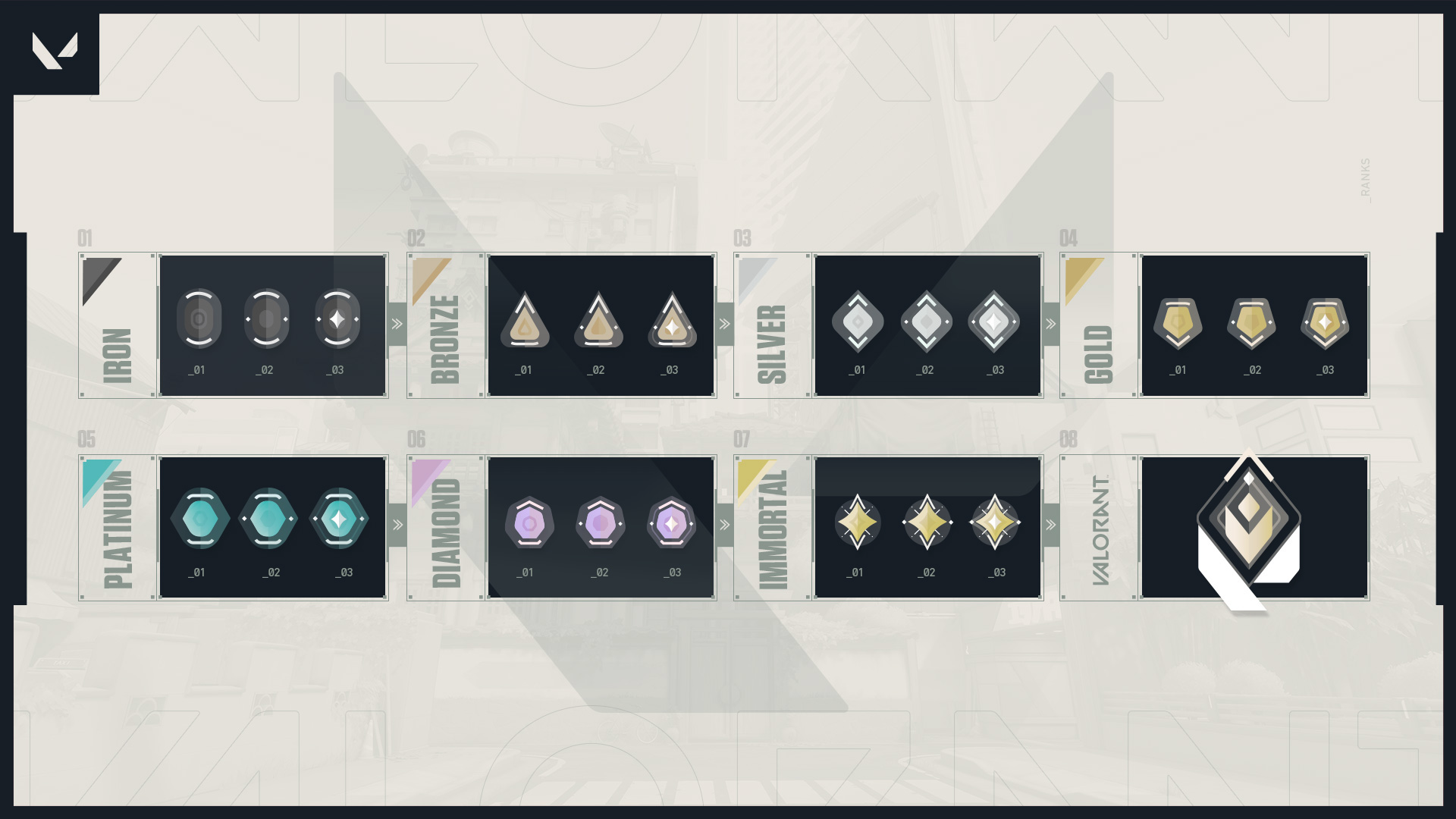 Now let’s talk about the game itself and its Agents and weapons!

VALORANT has, at the moment, 10 Agents. Let’s look at each one and their abilities: 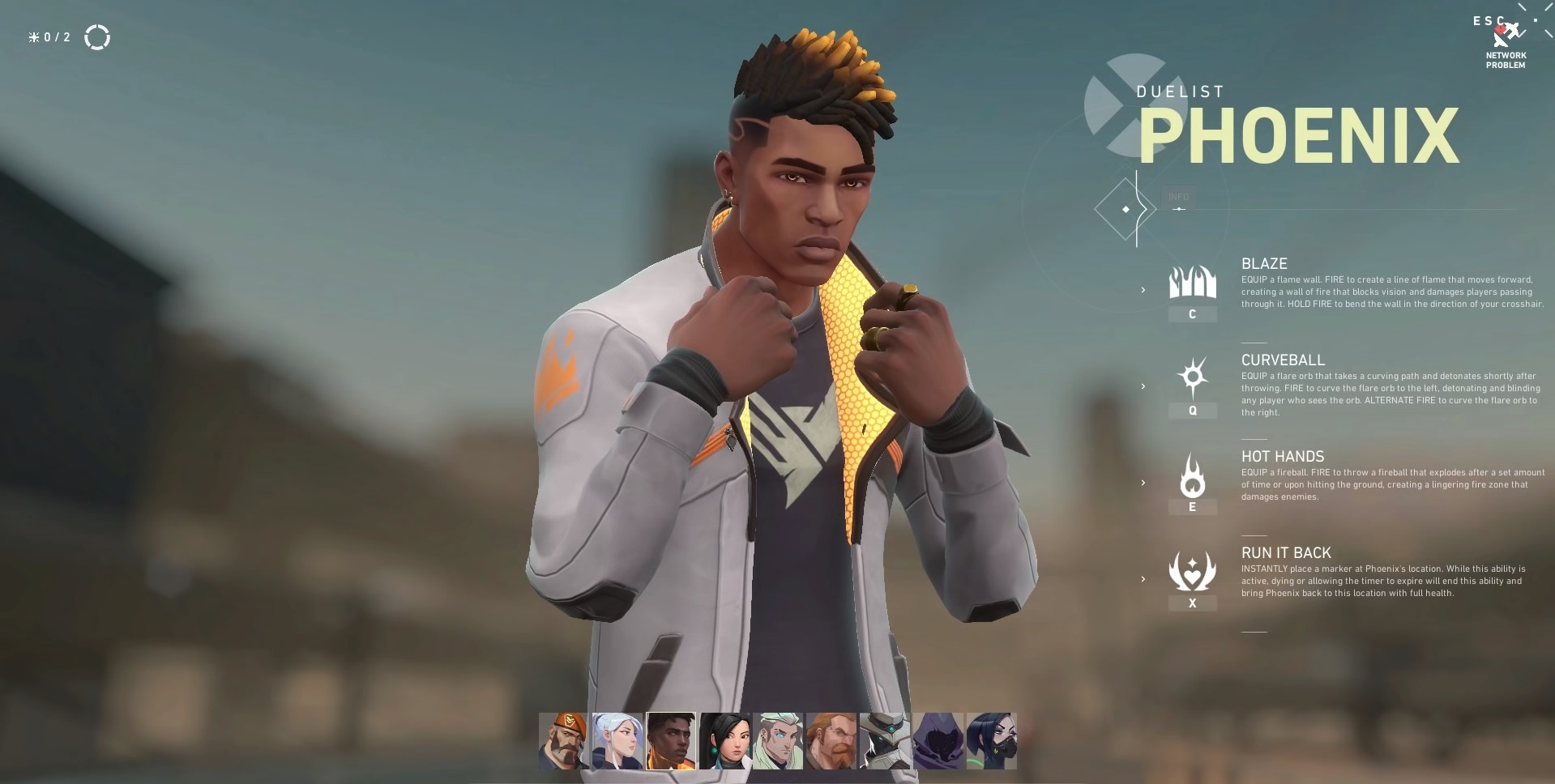 C: Blaze: Summon a wall of fire that blocks vision and hurts anyone passing through it. The wall can also be bent when casting.

Q: Curveball: Throw a flashbang that curves around corners.

E: Hot Hands: Throws a fireball that covers a small area in flames after a short wait or when it hits the ground. These flames damage your enemies but heal you.

X: Run it back: Marks your current location and starts a short timer. When the timer expires, or if you die, you respawn at the marked location with full health. 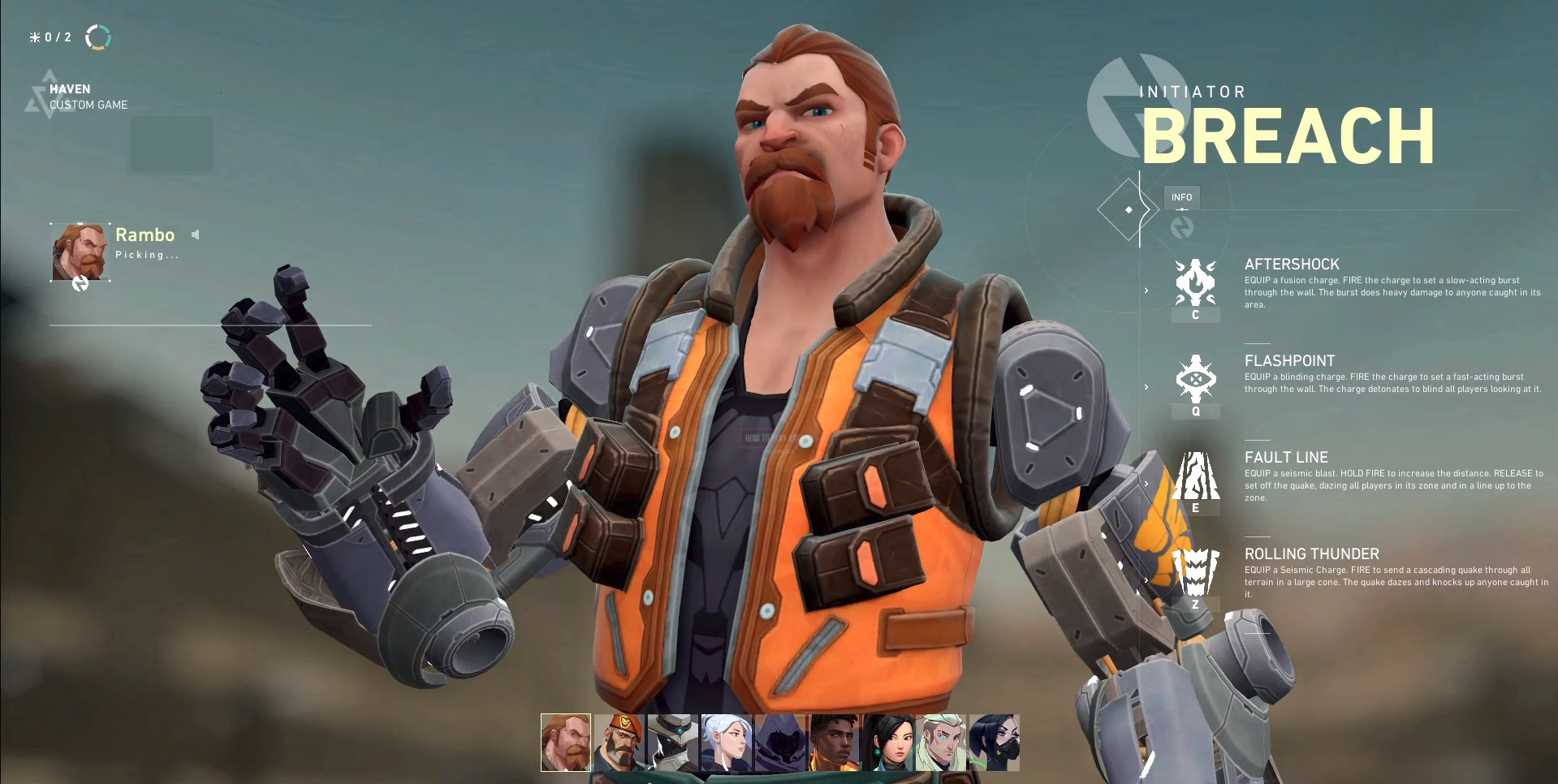 C: Aftershock - Fire an explosive charge that breaches through walls and damages enemies standing near it.

Q: Flashpoint - Fire a flash charge into a wall that flashes enemies on the opposite side.

E: Fault Line: Create a concussive quake in a straight line in front of Breach that disorients enemy aim and travels through walls. 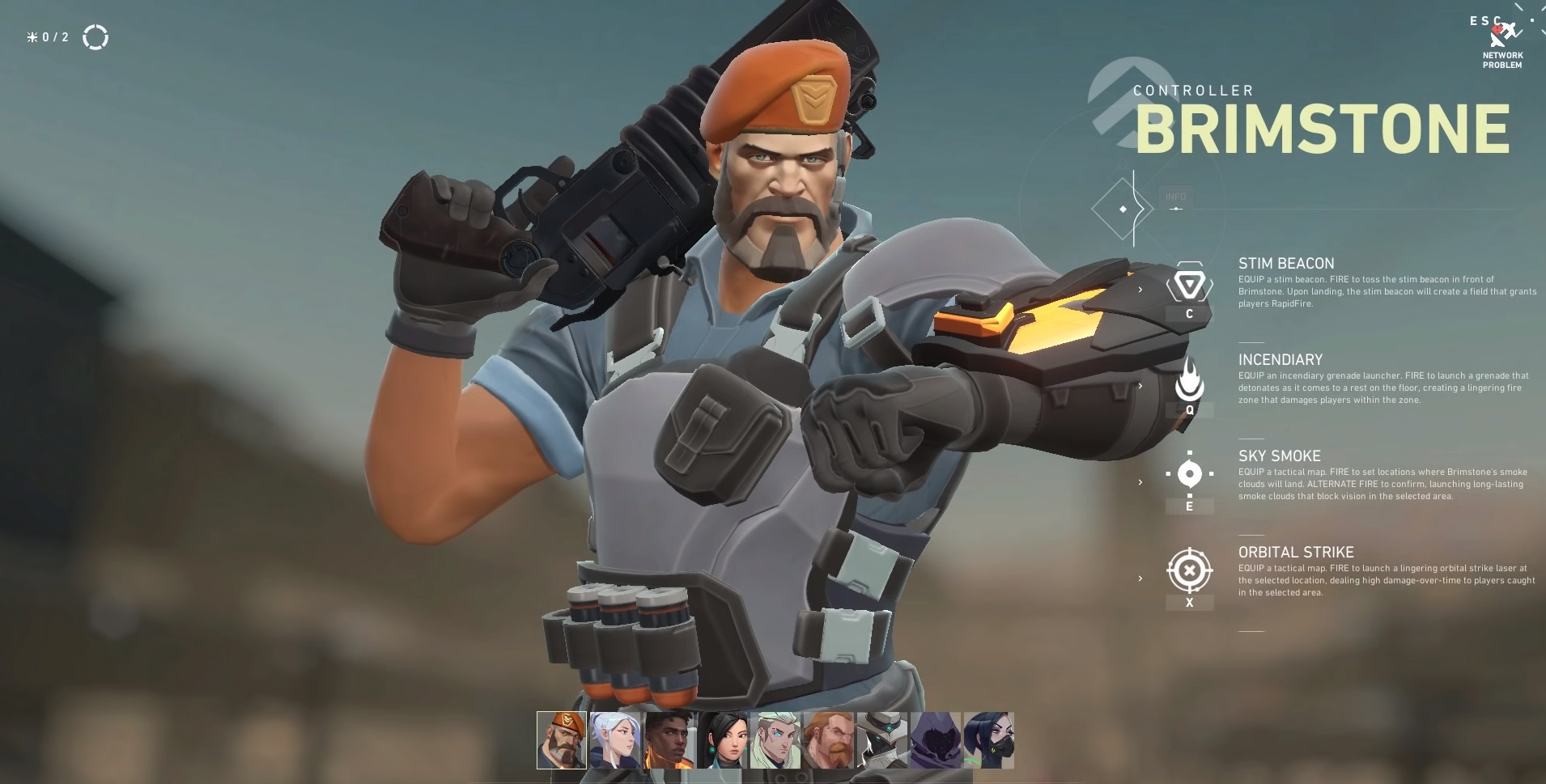 C: Incendiary: Throw an incendiary grenade that coats an area in flames.

Q: Stim Beacon: Select an area to call in this beacon that gives any player nearby a boost to fire speed.

E: Sky Smoke: Use your map to call in multiple smokescreens that block vision. 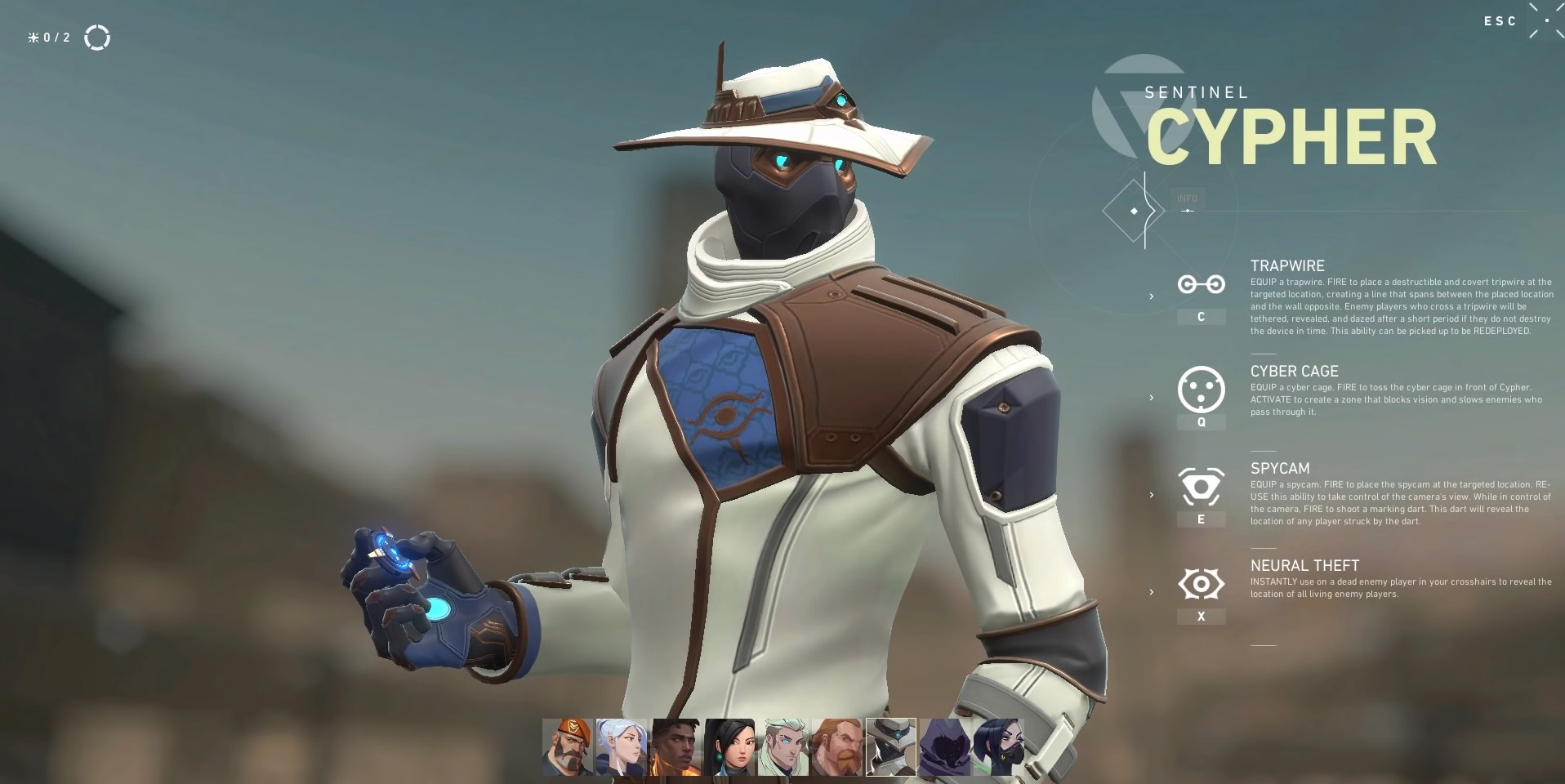 C: Trapwire: Place a tripwire between two walls that restrains and reveals enemies who cross it for a short time. Can be retrieved and reused.

Q: Cyber Cage: Places a trap that, when activated, slows enemies who pass through it. Cypher can also detonate the traps, either one at a time or all at once.

E: Spycam: Place a remote camera that can be manually operated to fire tracking darts at enemies.

X: Neural Theft: Steal intel from a dead enemy, revealing the location of their allies. 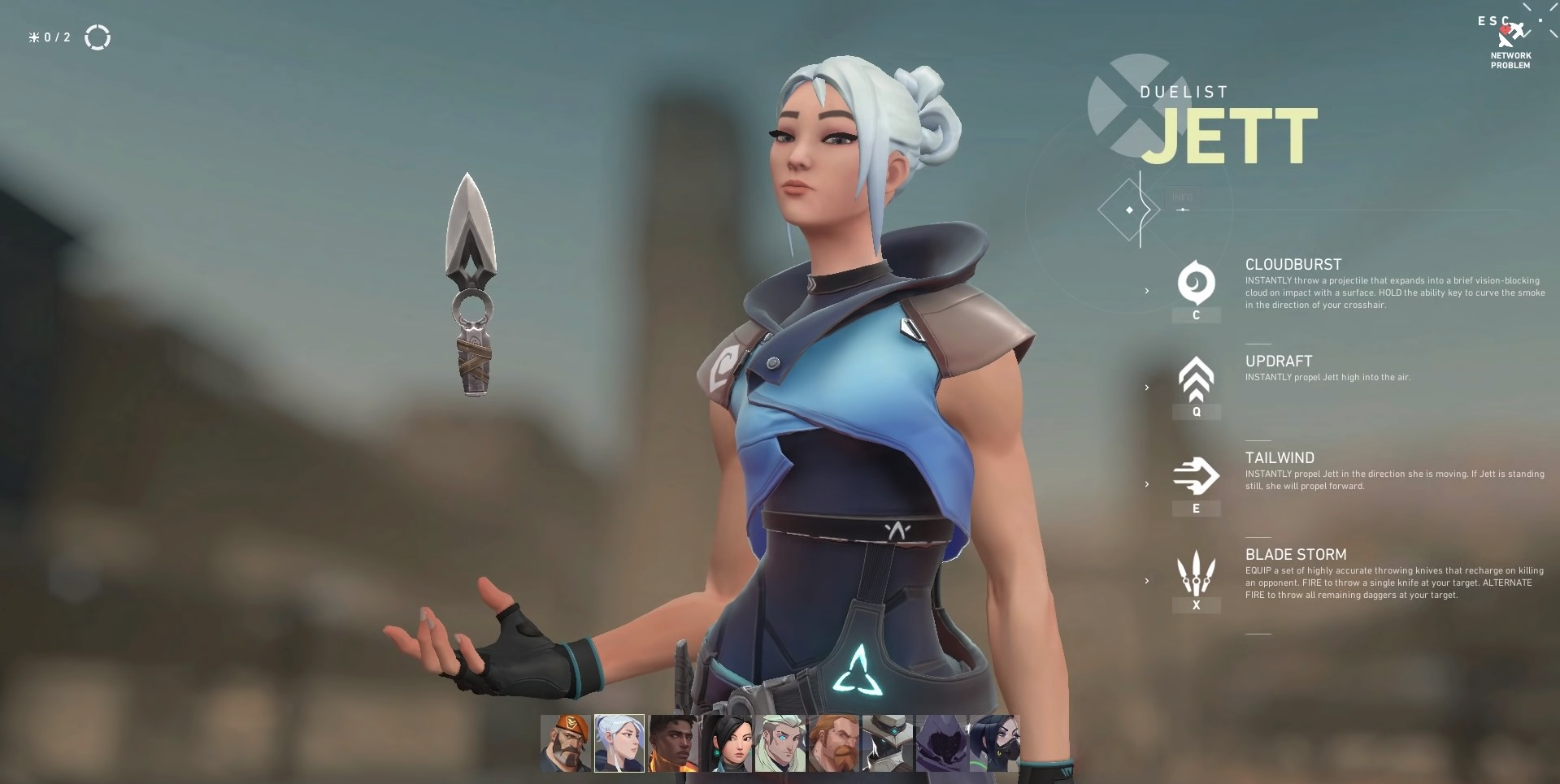 C: Cloudburst: Throw a smoke grenade that obscures vision wherever it lands.

Q: Updraft: Launch yourself upwards after a brief pause.

E: Tailwind: Dash a short distance in whatever direction you're moving.

X: Blade Storm: Wield several throwing knives that deal moderate damage and kill on headshots. Getting a kill replenishes your daggers and you can choose to throw them one at a time or throw all remaining daggers in a short-ranged burst. 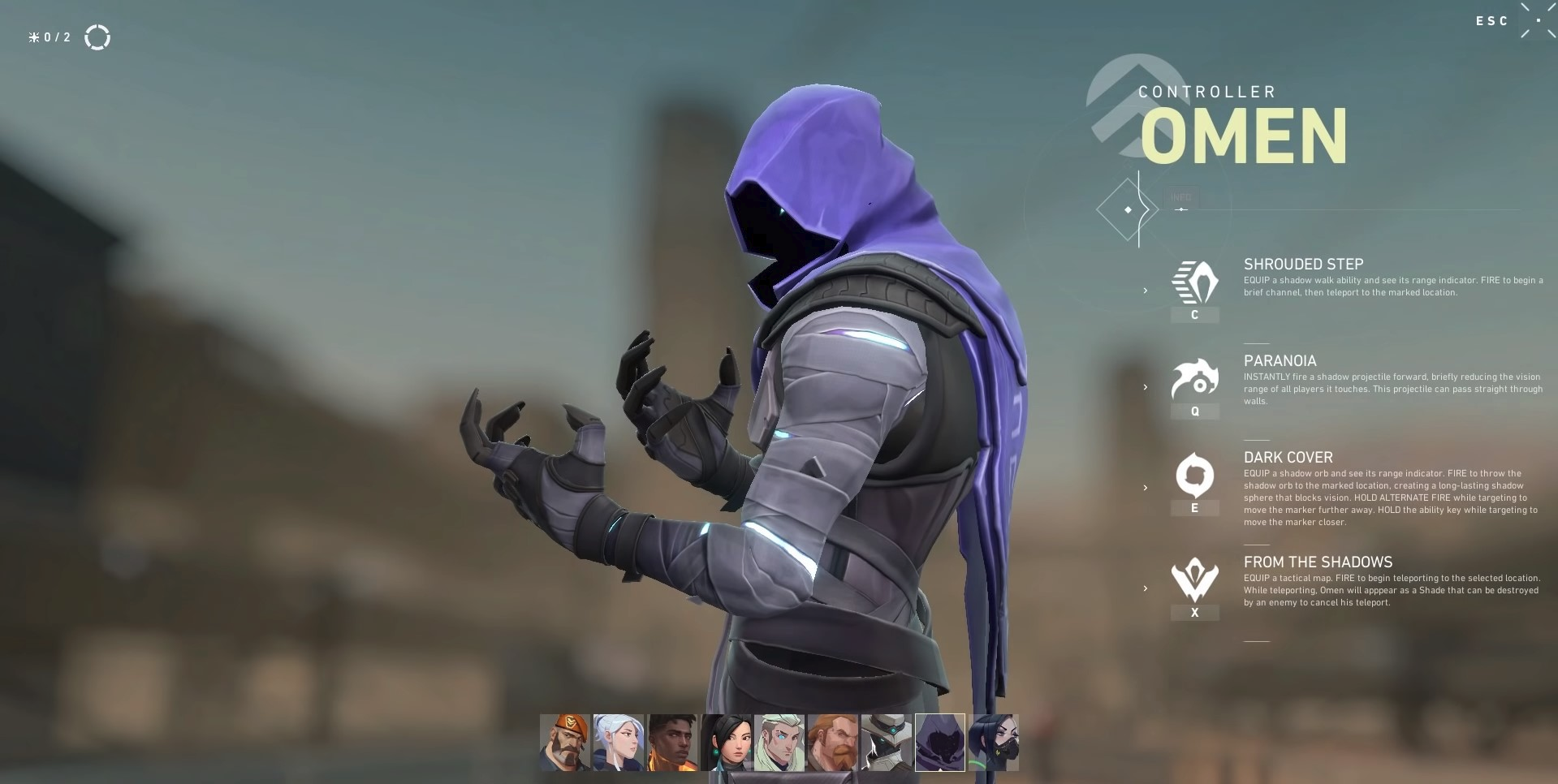 C: Paranoia - Launch a shadow clone in a straight line that inflicts anyone it touches with blindness.

Q: Shadow Walk - After a delay, teleport a short distance.

E: Dark Cover: Throw a stealthed orb that explodes into an obscuring sphere of shadow once it reaches its destination. Can be charged to increase its maximum distance.

X: From The Shadows: You can teleport to anywhere on the map, but it takes a few seconds to complete. Enemies can see a "shade" at your destination and cancel your teleport by killing it. After teleporting, you become invincible for a short time. 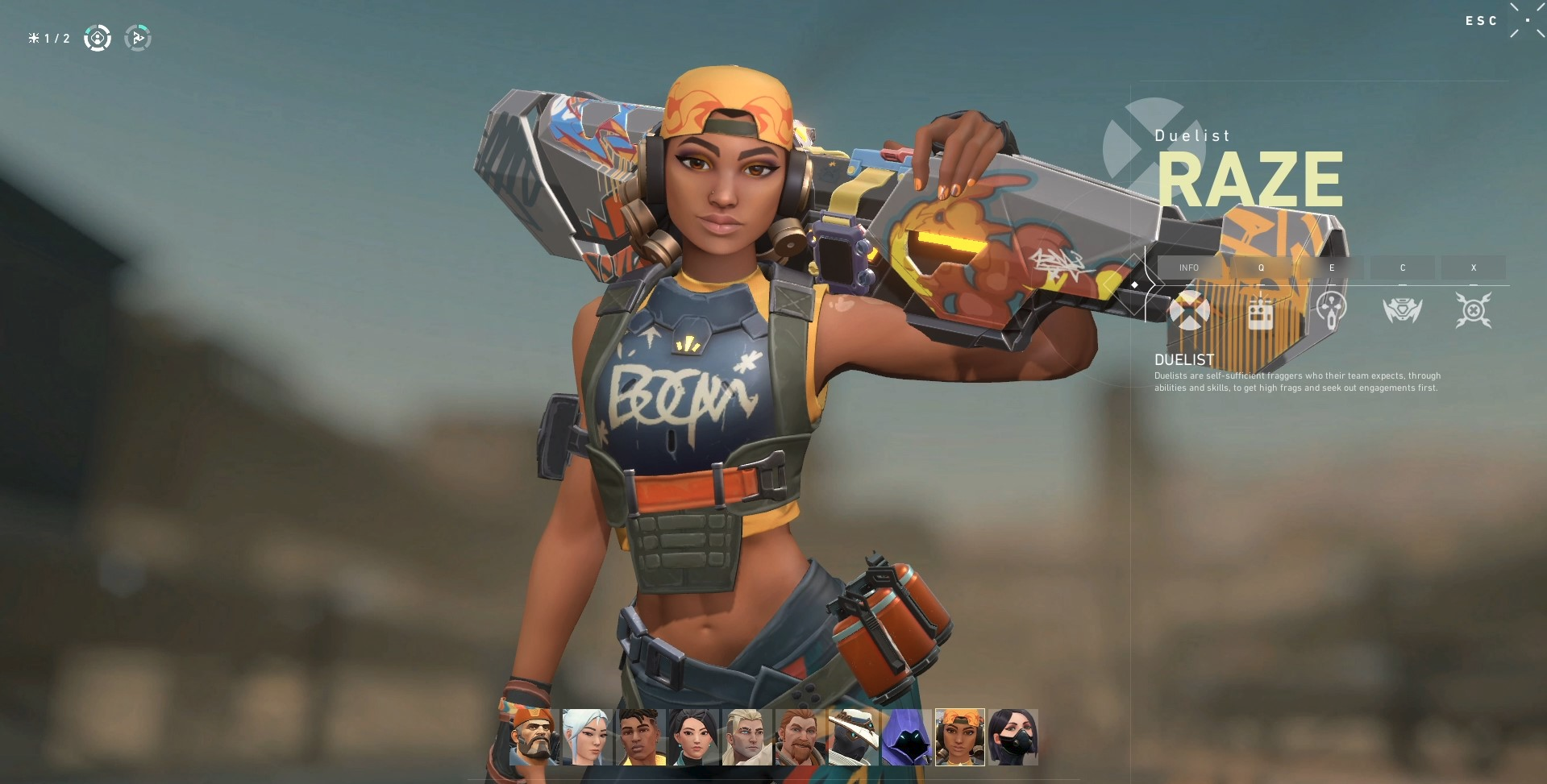 C: Blast Pack: Instantly throw a Blast Pack that will stick to the surfaces. Re-Use the ability after deployment to detonate, damaging and moving anything hit.

Q: Boom Bot: Equip a Boom Bot. Fire will deploy the bot, causing it to travel in a straight line on the ground, bouncing off walls. The Boom Bot will lock on to any enemies in its frontal cone and chase them, exploding for heavy damage if it reaches them.

E: Paint Shells: Equip a cluster grenade. Fire to throw the grenade, which does damage and creates sub-munitions, each doing damage to anyone in their range.

X: Showstopper: Equip a rocket launcher. Fire shoots a rocket that does massive area damage on contact with anything. 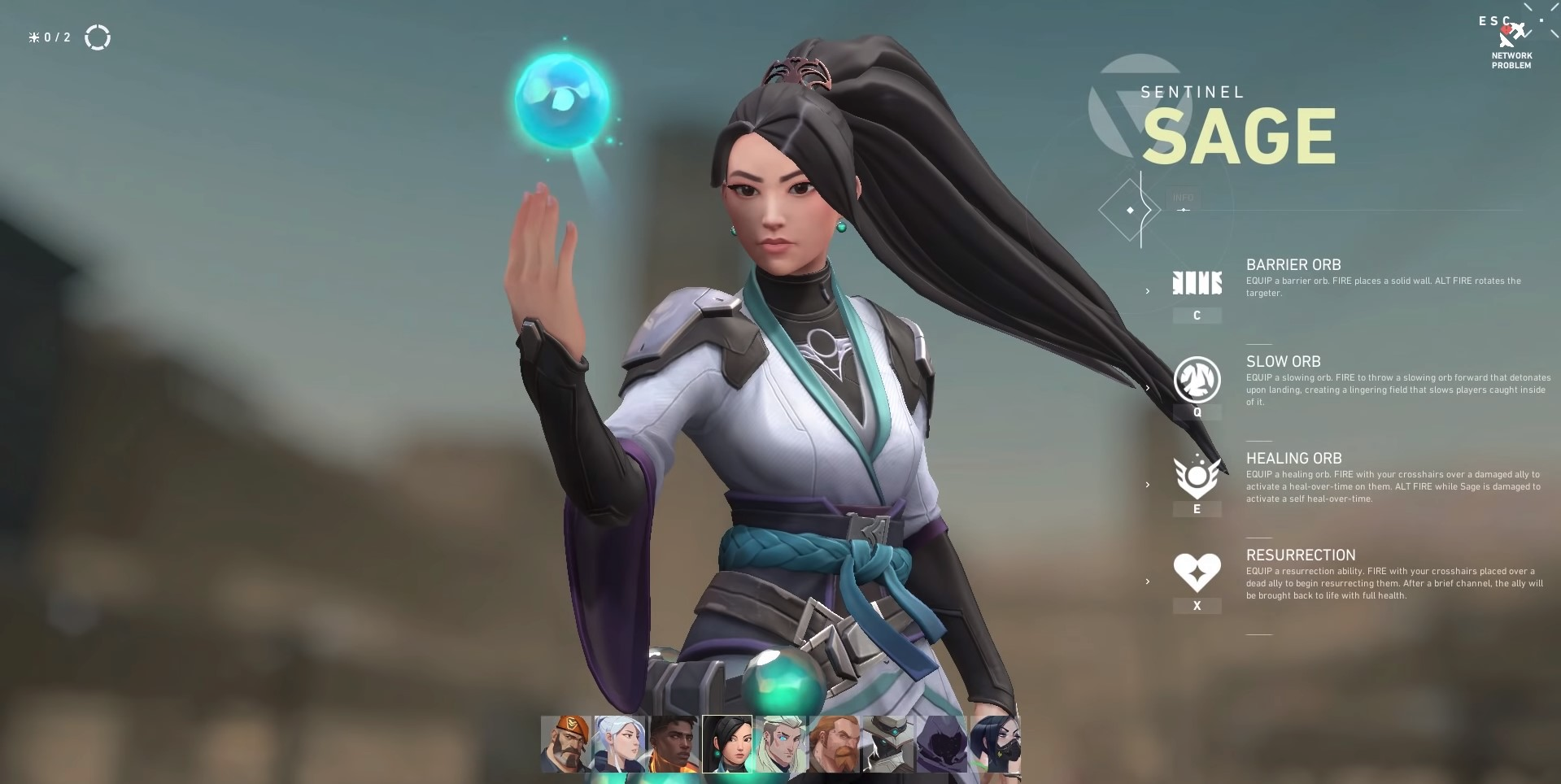 C: Slow Orb: Throws an orb that creates a zone that slows any who pass through it, preventing them from jumping and emitting a distinct noise when they move through it.

E: Healing Orb: Heals you or an ally over several seconds.

X: Resurrection: Revive an ally to full health after a quick delay. 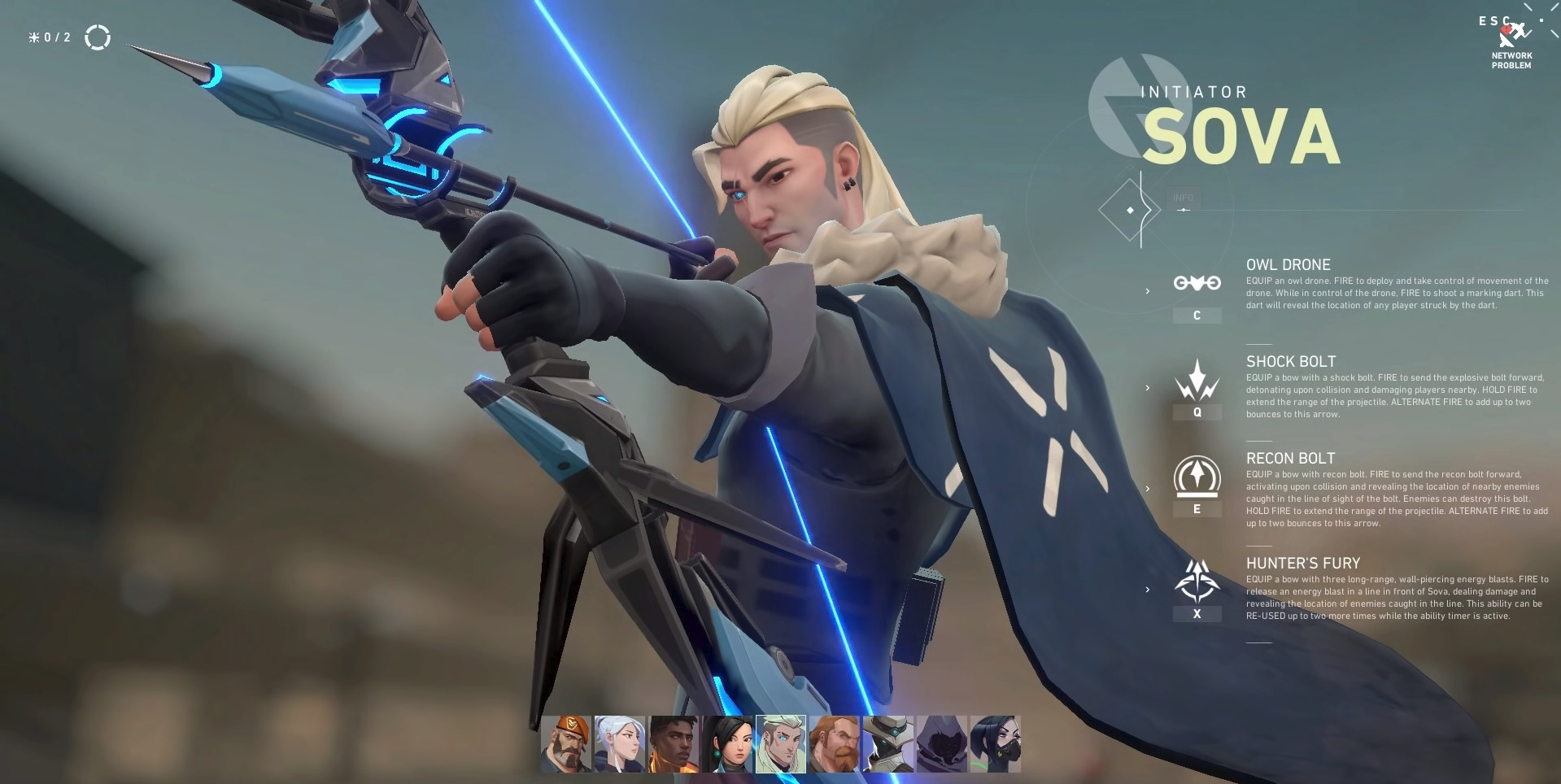 Q: Owl Drone: Use a pilotable, flying drone to scout the map and fire darts that reveal enemies.

E: Recon Bolt: Fires an arrow that emits sonar waves that marks and reveals nearby enemies for as long as it remains in place (can be destroyed).

X: Hunter's Fury: Fires up to three energy blasts that pierce walls and travel the length of the map. Any enemies that are hit take near-fatal damage and are revealed to your team. 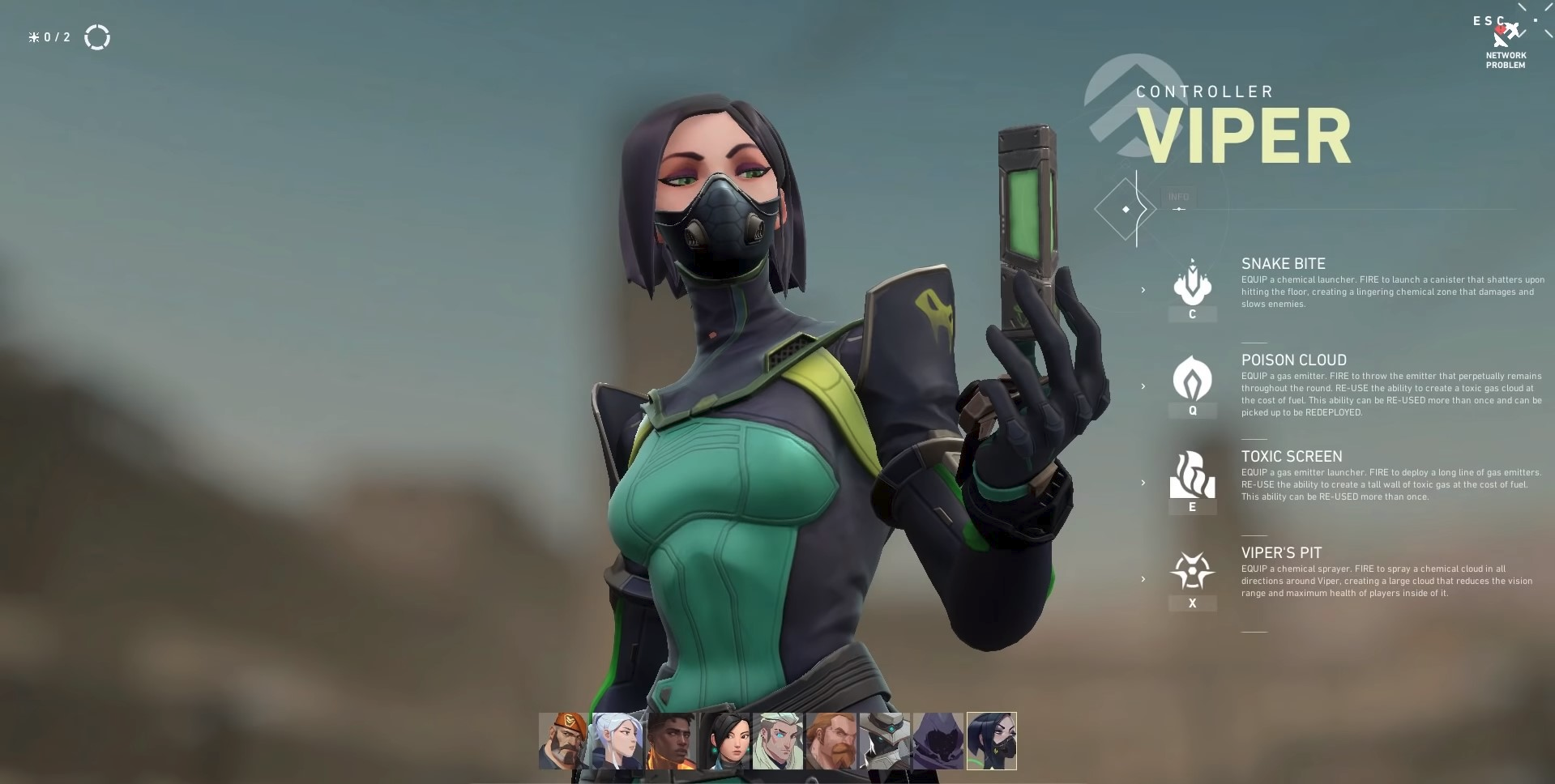 C: Snakebite: Fire a projectile that creates a pool of acid.

Q: Poison Cloud: Throw a gas bomb that emits a cloud of poisonous smoke at the cost of fuel. You can retrieve the gas bomb and throw it again after a short cooldown.

E: Toxic Screen: Creates a line of gas emitters that can be activated to create a wall of toxic gas at the cost of fuel.

And this is our introduction to VALORANT! Let us know if you enjoyed it and if you would like to see more content about VALORANT. You can always reach us on our social media to give us feedback!

About Boosting on VALORANT? Will it happen? You can count on us to provide you the best VALORANT Boosting, of course! Eloboost24 is already working on it and we want you to stay tuned since more content and more services will be coming soon!